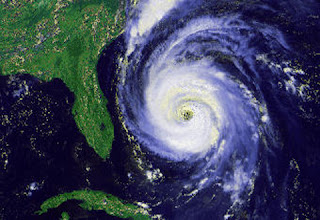 June 1st marks the first day of hurricane season. This runs for 6 months, through November 30th. Here are a few facts about hurricanes, as well as a few helpful websites, that I want to share with you.

Did you know that for hundreds of years, hurricanes in the West Indies were named after the particular saint’s day on which the storm made landfall? Using a woman’s name became customary after a novel called “Storm” was written in 1941 by author George R. Stewart. In 1951 the United States adopted the plan to name storms after the phonetic alphabet…Able, Baker, Charlie…But, in 1953 the weather service returned to only using female names. This officially ended in 1978, some believe due in part to the feminist movement, when names from both genders were used to designate storms in the Pacific. One year later, male and female names were included for the Atlantic storms, too. It has remained that way ever since. When a storm is considered to have been “devastating” its name is taken off the list permanently.

Once a system with a counter clockwise motion is identified, and the sustained wind speed are at 39 mph, the storm is named. A list of this year’s storm names can be found on the National Hurricane Center’s Website. This site is also a very good resource of information pertaining to hurricane preparedness. The hurricane link on the Collier County government site shares good information about Emergency Management; offering important suggestions such as having a “family plan”. NOAA recently released predictions for the 2015 Hurricane Season, expected to be a “below average” year for storms, but none the less, always be prepared! So many people who live in Florida have never experienced a bad storm, although these past few years have seen the likes of storms such as Sandy effecting areas that typically do not have to deal with hurricanes. With the increase in population, newcomers are encouraged to understand the importance of being prepared. I cannot stress this enough. [Our storm shutters went up yesterday.]

This post is not meant to alarm you; hurricanes are a fact of nature. Consider, we are notified days in advance of the potential of a storm making landfall. Another informative site is the Florida State Insurance website. It will answer some of the more frequently asked questions about homeowner’s insurance, and the need for flood.

We are quite fortunate to live in paradise…we simply want you to heed the advice of those of us who have been here a long time—It’s not about the parties: It’s about being safe…and, did I mention? …about being prepared!