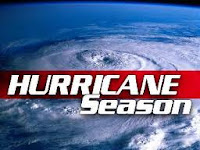 Today is June 1st, which officially marks the first day of the 2011 hurricane season. This will run for six months, ending on November 30th. Here are a few facts, as well as a few ‘links’ to informative websites that I’d like to share with you!

Did you know that for hundreds of years hurricanes in the West Indies were named after the particular saint’s day on which the storm made landfall? Using a woman’s name became customary after a novel called “Storm” was written in 1941 by author George R. Stewart. In 1951 the United States adopted the plan to name the storms after the phonetic alphabet…Able, Baker, Charlie…But, then in 1953 the weather service returned to using only female names. This ended in 1978, when some believe was due in part to the feminist movement, when names from both genders were used to designate storms in the pacific. One year later, male and female names were included for the Atlantic Ocean storms, too. It has remained that was ever since. Once a system with a counterclockwise rotation is identified and a sustained wind of 39 mph is measured, the storm is named. A list of this year’s names, as well as other good information for storm preparedness can be found on The National Hurricane Center’s Website.

I am also including a link to Collier County’s Emergency Management website for those of you reading this in the Naples area. This site offers important suggestions such as having a family plan, among other things. Keep in mind, this post was not written to alarm you. Hurricanes are a fact of nature. Consider this: We are notified days in advance of an upcoming storm. We are very fortunate to live in paradise…I just want you to be prepared!

If you would like additional information about how to best prepare your Naples home or condo for this storm season, by receiving a free Hurricane Preparedness brochure emailed to you directly, please contact The Harris Peppe Team by email at : harris-peppe@naplesrealestate.com