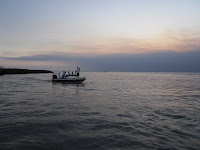 It happens every now and then, no matter how hard one might try to keep life in perspective…We get caught up in the daily routines and the simple beauty all around us goes unseen. -And then all of a sudden, in that dizzying rush to get things done, something or someone steps into our path and we slow down to see.

As I turned out of the road leaving the community where I live on my way to the grocery store I accidentally made the wrong turn…deep in thought, I drove for a few minutes before asking myself, “Where are you going Michele”? Realizing I was driving on the wrong road, I decided to shop at a different store than I where usually go as I was now heading in that direction…after checking out and walking to where my car was parked I saw a couple that looked familiar to me…In a hurry, I just kept walking to my car, but something in my head said, go back and see if that is Raphael and his wife…I did, and it was. They were new to America when I helped them buy their first home 20 years ago. We hugged and cried and they shared some stories with me…best of all they were proud to tell me that their son had graduated from college last year! They then told me, that through their church, they learned of a seminar featuring the author Dave Ramsey. I was familiar with this as my youngest son is also attending the same class! Raphael told me that at last Thursday’s lecture they were told that now is a great time to buy a home. They had sold the home I helped them buy some time ago…and now they needed someone to help them again. They weren’t sure who to turn to…they put it in God’s hands and hoped they could find me! Three days later, there I was, in the parking lot at a store I don’t normally go to reuniting with a sweet couple who could not believe that I remembered them!

Then, last night we went out on our deck boat to catch sunset. The sky was a little hazy because of the fires in the Everglades, but the sun shining through the clouds was a neon orange. We knew it wasn’t going to be a very good sunset, but we headed out the pass anyway. As we were coming back in from the gulf we idled to watch a fisherman who looked as though he had hooked a big one! Not once, not twice, but three times we watched him try to reel in a tarpon! Each time the fighting fish broke the line as it neared his boat, but to see a 100+ pound tarpon fly out of the water and bend the rod as the young man tried to tire him out was an amazing thrill that you don’t get to see very often. Tarpon are not a fish you catch to eat, so I was really quite happy that they didn’t land that beautiful creature, but the fight they both gave was quite exciting to witness.

And so, here’s to Raphael and to the tarpon, and to this amazing phenomenon called synchronicity…here’s to slowing down, and being aware…I can’t wait to see what crosses my path today!